The companion to the highly popular 30 Days, 30 Ways to Overcome Anxiety has arrived!
Like its predecessor, this provides you with an easy and practical way to work through and out of depression using Bev's simple and unique take on this complex subject. You CAN beat the blues!

​
​​
AND COMING SOON!
​THE essential guide for parents of anxious children (and anxious parents!) 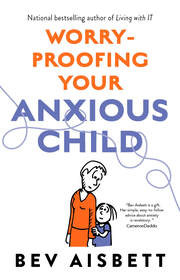 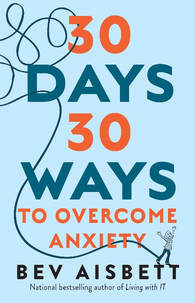 TWO MUST-HAVE TITLES FOR YOUR LIBRARY!
30 Days 30 Ways to Overcome Anxiety  and the all-new revised    and expanded classic, Taming the Black Dog
(See Black Dog details further down page)
This clear, practical workbook shows you how to build your skills day by day to help you master your anxiety.
Based on many of the exercises Bev has been teaching through her workshops for the past twenty years,
30 Days, 30 Ways provides clear, simple daily building blocks to assist in building recovery - techniques that can
be used for ongoing wellbeing and to help you handle life's challenges more effectively
​
This is a highly approachable, concise, practical, simple and above all, proven method of overcoming
anxiety. $25.95

ABOUT BEV'S BOOKS
(See full list available for purchase below) 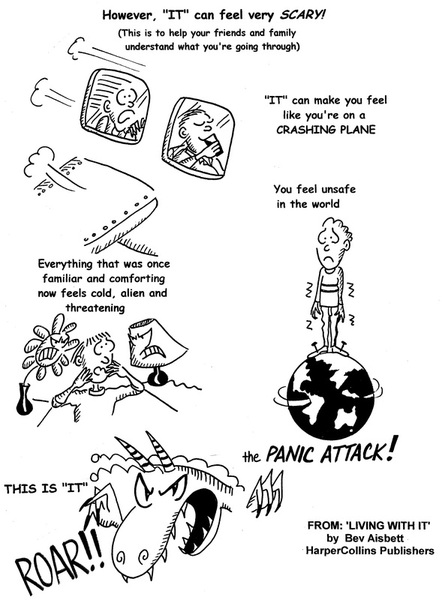 Bev’s 14 highly regarded self-help titles including Living
with IT and Taming the Black Dog have brought
hope and relief to thousands of readers both nationally and internationally over the past twenty years.

As an established illustrator and cartoonist and previous
sufferer of severe anxiety and depression, Bev devised her unique cartoon-and-text format to  convey the key steps
to recovery in a simple, immediate and demystifying way
to those in distress.

Far from simply decorative diversions, her cartoons are
powerful tools which, in conjunction with her simple text,
help to quickly convey meaning and provide easy-to- comprehend examples of the key steps to recovery.

Other titles written and illustrated by Bev but which are no longer in print include her first illustrated book Purrsonalities - Life with your Cat, followed by Muttmobiles -out and about with Man's Best Friend and two mini format titles The Little Book of IT  (now sold in normal format as The Book of IT) and Recovery- a journey to healing.
Bev also collaborated with Sydney psychologist Elizabeth Reiger in 1998 to create Get Over It- Beyond the Body Beautiful .
Her illustrated books of humorous reflections Paws for Thought - Animal Wisdom for your Day  (from which a percentage of proceeds goes to Lort Smith Animal Hospital) and Mum's the Word are available from JoJo Publishing www.jojopublishing.com

Several of Bev's self-help titles have also been translated into foreign languages including Chinese, Japanese, Korean and Spanish (Mexico and Portugal) by publishers in these countries and HarperCollins has just announced the launch of Harper360  which will introduce Bev's books into a wider global market, including the U.S. and U.K.

ALL OF IT  Please note: Prices below are for shipment within Australia only. Please contact Bev for overseas shipment 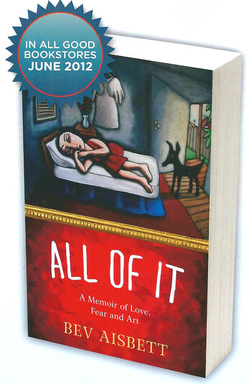 Bev’s autobiography All of It – a Memoir of Love, Fear and Art was
released in 2012.

All of It chronicles Bev’s own journey into - and out of - severe anxiety
and depression and her quest for healing and enlightenment in conjunction with her
evolution as a writer and artist.

This moving and lyrical book reveals Bev’s talents not only as a non-fiction author but also as a creative writer and the artwork featured on the cover is Bev’s painting The Long Sunday.


COPIES ARE PRINT-ON-DEMAND, SO THERE WILL BE A SHORT DELAY 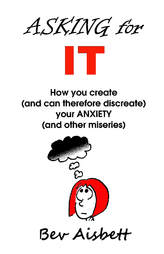 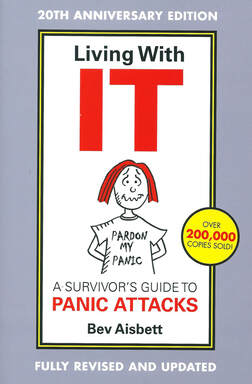 Living with IT – a Survivor’s Guide to Panic Attacks
Bev’s first illustrated self-help title hit the best-seller list in the first week of its release in 1993.

Living with IT  introduces  the cartoon character IT , which Bev created to give voice (and the opportunity to 'talk back to'!) the 'inner critic'; a device which rapidly assists the reader to identify and address the negative and anxiety-provoking thinking style common to anxiety.

Illustrated throughout with Bev's uniquely devised cartoon format, Living with IT simply and clearly explains the nature of anxiety and the key steps to quickly and effectively reduce anxiety symptoms. Living with IT is especially helpful to those in the first stages of anxiety and panic attacks.

Much loved by readers, health professionals and counsellors Living with IT as a must-have introduction to the basics of managing anxiety

Revised and Expanded for its 20th Anniversary, Living with IT remains a classic reference for anyone experiencing anxiety and retains its affectionate title declared by many readers as 'The Anxiety Bible'

Living IT Up – the Advanced Survivors Guide to Anxiety-Free Living expands
on the skills presented in Living with IT and extends its readership to assist
people to better handle stressful situations in daily life in general such as handling
criticism, incessant worrying and stress in social settings

Letting IT Go –Attaining Awareness out of Adversity  is the third title in
the anxiety series and opens the way to greater self-awareness  by exploring
the growth to be found within challenges whilst promoting a more philosophical
perspective on life’s inevitable ups and downs  $24.95 (Inc P&H)

PLEASE NOTE: THIS TITLE IS NOW PRINT ON DEMAND (WHICH MEANS A 2-3 WEEK DELAY. HOWEVER, IT IS INCLUDED IN THE 3 BOOK BIND-UP 'FIXING IT' (SEE BELOW) ​

THE BOOK OF IT

The Book of IT – 10 Steps to Overcoming Anxiety  ( which was formerly
published in mini format as The Little Book of IT) introduces the reader to the
key steps of handling anxiety which are the foundation of Bev’s popular
workshops, which have assisted people to overcome anxiety since 1998. $24.95 (Inc P&H)

PLEASE NOTE THIS TITLE IS PRINT ON DEMAND, SO THERE WILL BE A 2-3 WEEK TURNAROUND

THE REVISED AND EXPANDED TAMING THE BLACK DOG 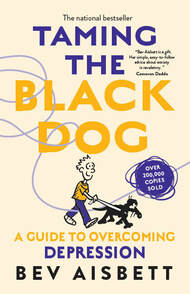 Along with Living with IT, Taming the Black Dog – a Guide to Overcoming Depression has become a classic. Released in 2000, this version is a fully revised and expanded version of the original book. The new material takes the reader deeper into the recovery process and challenges the thinking that keeps one stuck in the trap of depression. This version has been designed to tackle resistance and inspire the reader to step beyond a sense of limitation and powerlessness.

Bev’s unique and simple cartoon format takes readers through the ins and outs of
depression and to the other side, whether for those experiencing serious depression
or just going through a fit of the blues. $24.95 (Inc P&H)

Released in 2010, I Love Me - a Guide to Being Your Own Best Friend
takes the reader to the next stage of self-empowerment through addressing self-esteem
and building a healthier and much more supportive relationship with self, a crucial factor in both recovery
and wellbeing in general $24.95 (Inc P&H)

A valuable companion to I Love Me, Bev's second 2010 release Get Over It - finding release from the Prison of the Past gently urges the reader to own and explore any attachment to the past or sense of being a victim to circumstances which may stand in the way of moving on from unresolved traumas. These two titles greatly empower the reader to find new independence and freedom  $24.95 (Inc P&H)

Fixing IT - the complete Survivor's Guide to Anxiety-Free Living  is an occasional limited edition compilation of Bev's first three 'IT' books - Living with IT, Living IT Up and Letting IT Go. $32.95 (INC P&H)

All above titles are published by HarperCollins and are also readily available at major bookstores. Some titles are also available in digital format (www.harpercollins.com.au)
OTHER AVAILABLE TITLES BY BEV AISBETT

In 2010, having read and appreciated the refreshing approaches of the Happiness Trap, Bev approached Dr Harris with the idea to do an illustrated version of the book, using the same simple cartoon format which has made her IT books so popular with readers. Already a fan of Bev's books, Dr Harris readily agreed.

The Happiness Trap explores the damaging myth of and quest for 'happily ever after' which is in reality is a cause for considerable unhappiness in our lives. Using the principles of ACT - Acceptance and Commitment Therapy, Bev has condensed and illustrated Dr Harris' landmark original into a simple, easily accessible version which reveals the healing potential to be found through embracing, rather than avoiding the challenges of daily life.

The illustrated version is now complete and has received both local and overseas interest at the 2012 Frankfurt International Book Fair. Released by Dr Harris' publishers Exisle Publishing 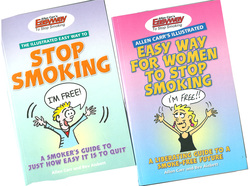 Utilising the same effective and simple-to-understand cartoon format which has assisted thousands of readers to recovery from anxiety in her IT books, Bev, in conjunction with the original author, has re-invented the enormously successful Easyway to Stop Smoking and Easyway for Women to Stop Smoking books by Allen Carr. Allen was originally a 100 cigarette a day smoker until he discovered his revolutionary formula for quitting. Thousands of people worldwide, including actor Anthony Hopkins and entrepreneur Richard Branson, have now successfully quit using Allen Carr's methods and Bev's illustrated versions of his books have provided further highly effective tools in assisting smokers to stop their smoking habit once and for all.
Published by Arcturus Publishing U.K.

Available www.amazon.com and other online outlets